We wanted to find out exactly how much takeaway consumers know and understand about the impact these marketplaces are having on the restaurant and takeaway industry. So we commissioned global research company, Censuswide, to conduct an online survey of 1,031 UK consumers who order an online takeaway at least once a month.

What we learned is that consumers are huge supporters of their local restaurants and takeaways and want to order online direct to help them survive and thrive during this incredibly challenging time for the hospitality sector, and into the future.

These are definitely troubling times for many people and seven in ten consumers (69 percent) are worried that their local restaurants will close permanently because of lockdown, according to the survey results.

The study reveals that three in five consumers (60 percent) have actively tried to support their favourite restaurant during lockdown by ordering a takeaway online but through a marketplace, like Just Eat, Uber Eats or Deliveroo.

The latest independent analysis by Backman estimates Deliveroo, Just Eat and Uber Eats, are capturing more than £1bn in annual fees from UK restaurants , in a market last year worth £8.5bn . 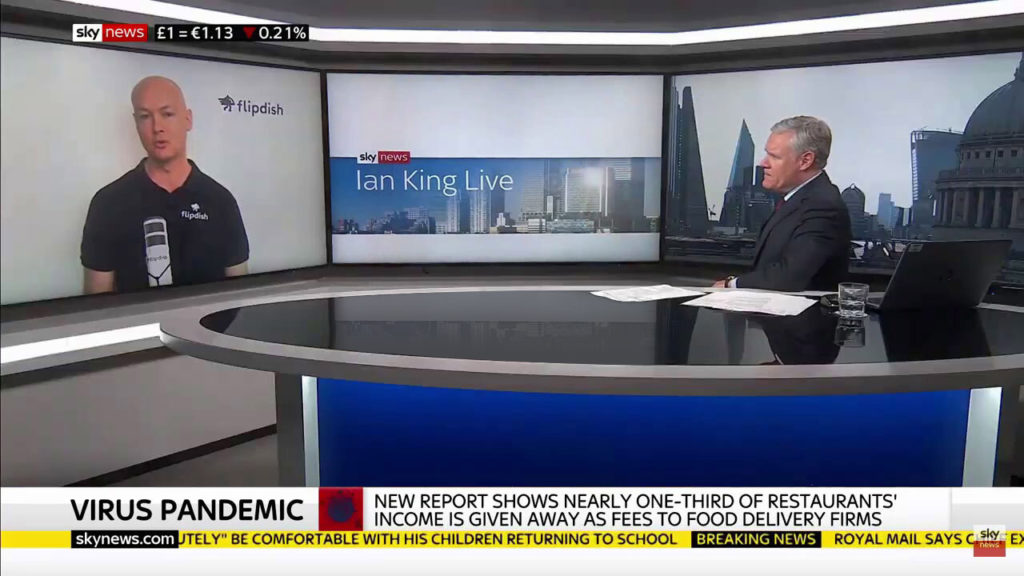 Despite the huge revenue, nearly half (48 percent) of takeaway buyers are unaware that typically up to one-third of their takeaway value is siphoned to these marketplaces in commission. Three in five consumers (59 percent) feel it is unfair that marketplaces command such high commission and four in five consumers (83 percent) believe they should be more transparent online about the hidden fee charged to restaurants. In fact, a large majority (70 percent) said the level of commission means they would now prefer to order direct if it helps save their favourite independent restaurant from closure.

The survey finds nearly three-quarters (73 percent) of takeaway buyers have already made up their mind before using online marketplaces suggesting independent restaurants are simply losing out on the revenues they would have made anyway, and the promise of opportunities to reach new customers is limited.

Flipdish CEO and co-founder, Conor McCarthy, says that switching to a takeaway service is the best way restaurants, bars and pubs across the UK can sustain revenues during lockdown. But this has increased the power of third-party delivery companies and they are bleeding independent restaurants dry with their high commission fees, which are cutting into already-reduced profits.

Worse still, he says, removing commission on collection orders during lockdown is nothing more than a marketing stunt masquerading as social responsibility. After lockdown, marketplaces can increase fees to original levels by which time restaurateurs will have directed thousands of loyal customers onto their platform, where they take a large cut of every order and all the data that comes with it. The discount hasn’t even made Just Eat’s offer competitive.

He says that people want their favourite restaurants to survive but many don’t realise that the best way to support these businesses is to order direct so more of the money stays with the restaurant.

If Just Eat, Uber Eats and Deliveroo insist on taking such high commissions, we urge for more transparency to help consumers actively choose how they order food online and who profits most.

UK chef, Damien Wawrzyniak, who has cooked for the royal family several times, has seen the damage marketplaces can cause first-hand. He says he knows that there are thousands of people out there who want to support their local restaurants. His message to them is that it would make a huge difference if they all ordered directly through a website, rather than through a third party app.  The commission fees that aggregators like Just Eat, Uber Eats and Deliveroo charge destroy restaurants‘ margins, he says, so by trying to help them consumers are actually just helping a multi-billion dollar company get even bigger. 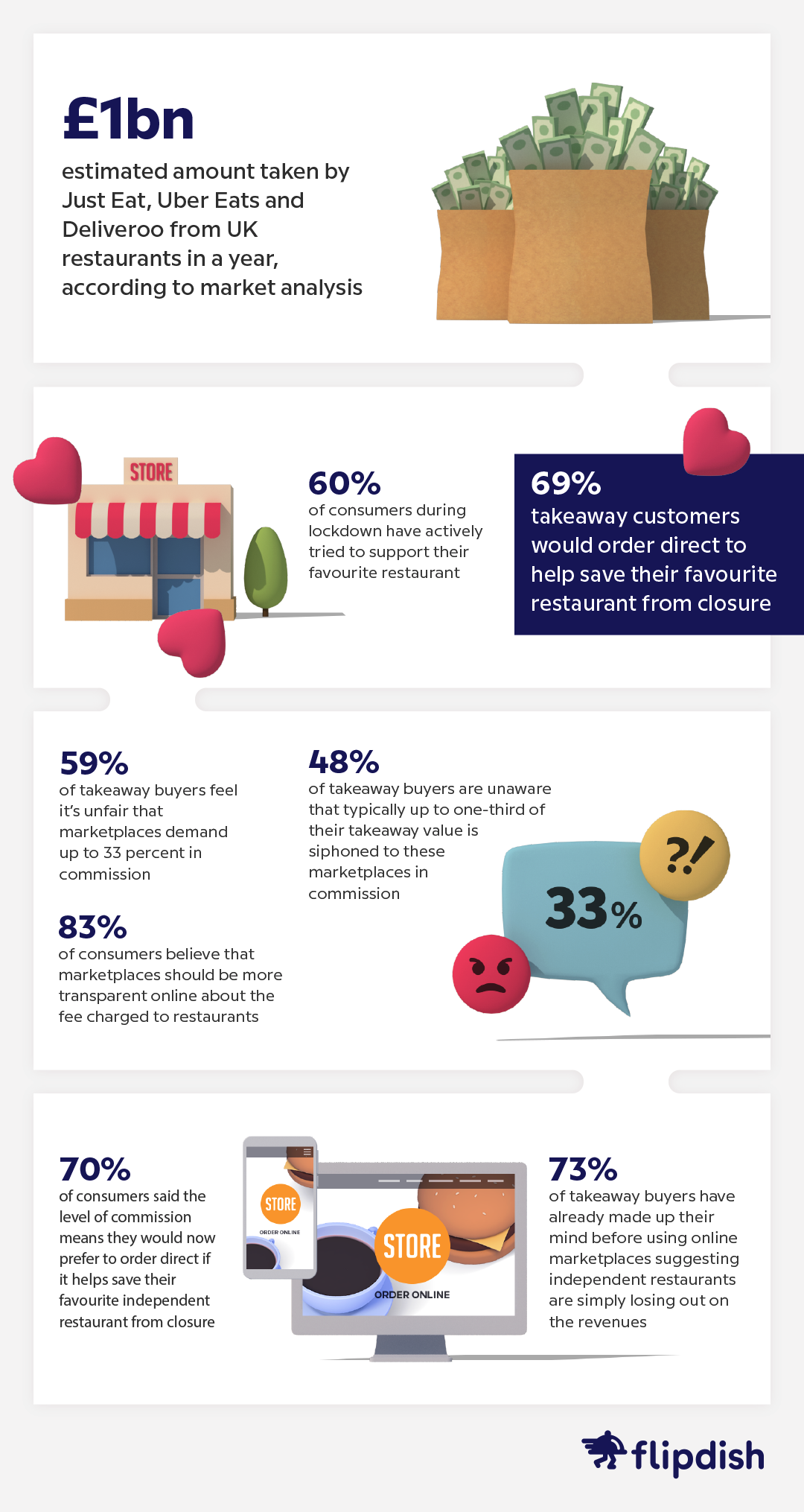 “Post-COVID,  restaurants will need to find extra revenue streams,“ Salt says.„For some, the answer might be takeaway and delivery but at what cost? Claiming to be the answer, the aggregators deliver a sub-standard version of our product to customers whilst draining profits with hefty fees.”

„They take a ridiculous cut,“ Broady says. „If the food scene in Cambridge is to remain vibrant and diverse after lockdown, independent restaurants need the support from the public and it will make a huge difference if they can order direct from their websites.”

Handing important information about customer trends to marketplaces is a double-whammy. Not only can local restaurants not spot opportunities for growth,  so-called dark kitchens located in industrial estates may take customers away from the very restaurants that provided them with the data in the future.

Backman says that operators who have previously steered clear of delivery are having to switch to a takeaway and delivery only offer, which is not an ideal model in terms of the bottom line but it puts cash in the till and businesses will take anything they can get in this unprecedented time.

Steps to reopening a restaurant in COVID-19: Download our essential checklist 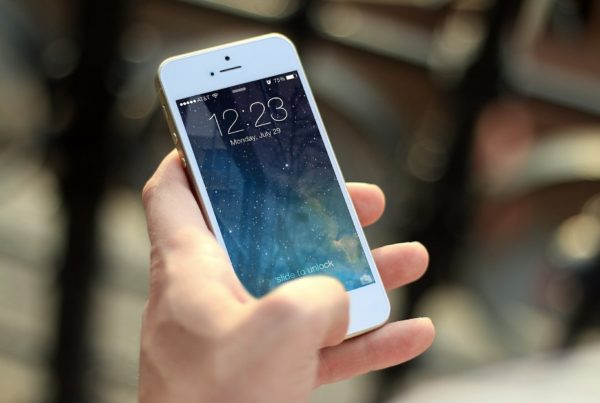